Campazzo is expected to leave Real Madrid this summer for the NBA. The Argentinian player has to be released first from the Spanish powerhouse so that he can go to the NBA. According to the Spanish journalist Carlos Sanchez Blas, the player will of course have to pay an amount of money to Real so that he can be released. This amount will be around 6 million euros, according to Sanchez, with the team signing Campazzo paying 750k as the law says.

Having this in mind, Campazzo should find a great contract in the NBA so that he can pay the rest of his NBA buyout. According to Sanchez, the Minnesota Timberwolves have expressed their interest in signing the Argentinian guard, with Dallas Mavericks also eyeing his case.

Mark Cuban on why he’s accepting Dogecoin as payment for tickets, merchandise 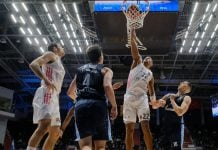 Bradley Beal: “I feel like the only way you can guard...