The NBA and NBPA have announced that two players tested positive for coronavirus out of 322 tested since arriving at Disney.

Those two players never cleared quarantine and have since left the site to isolate at home or in isolation housing, according to Shams Charania.

The full NBA and NBPA statement:

As a result of the players leaving, the hope is that the campus isn’t compromised and there won’t be any type of outbreak.

While the two players’ names weren’t revealed, Houston Rockets star Russell Westbrook was the latest player to announce that he tested positive and expects to join the team in Orlando. 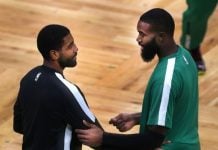