Jonas Valanciunas shared his thoughts about the plans of the NBA to resume the season on July 31.

The big man of the Memphis Grizzlies said it will be difficult for the players to return to action, yet he and his teammate are motivated to complete the season.

“It’s kind of like coming back from the summer. We’ve had two-and-a-half months off. But then again, I play with the (Lithuania) National Team every summer, so it’s not like you always have so much time off every summer.

Prior to the NBA suspension, Memphis was eighth in the West with a 32-33 record. 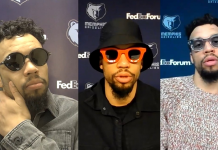 Kyrie Irving not expected to travel with the Nets to Memphis

Skip Bayless gives LeBron James a ‘B’ for his performance vs. Grizzlies

Five tips that will help you once you decide to bet...

How can you become better at betting on basketball?