Despite being one of the top point guards in the NBA in the ’80s and ’90s, Isiah Thomas did not make it to the 1992 Dream Team. The rumor was that it happened because Michael Jordan didn’t want Thomas on the team. The two did not get on very well back in the day as the ‘Bad Boy’ Pistons would face the Bulls frequently. However, Jordan denied such talks, saying on ‘The Last Dance’ that he had nothing to do with it.

An audio recording was released on The Dream Team Tapes with Jack McCallum podcast in which the Bulls legend appears to be telling Rod Thorn that he wouldn’t play for the Dream Team if then-the Pistons point guard was on it.

“Rod Thorn called me. I said, ‘Rod, I won’t play if Isiah Thomas is on the team.’ He assured me. He said, ‘You know what? Chuck doesn’t want Isiah. So, Isiah is not going to be part of the team,'” Jordan said on the tape, per Larry Brown Sports.

Listen to the full episode of The Dream Team Tapes with Jack McCallum:

Ja Morant gets inspiration from Michael Jordan ahead of Game 2 vs. Timberwolves 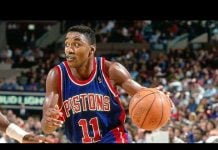