NBA rookie Gal Mekel has decided to not play for Israel at Eurobasket 2013 in order to concentrate on his season with the Dallas Mavericks.

This led the talented point guard to the NBA as he inked a deal with the Dallas Mavericks, a surprising move, some would say considering that during last year’s Eurobasket Qualifiers, he saw limited playing time.

Israel are housed in the capital Ljubljana in Group A, alongside, France, Germany, Great Britain, Ukraine and Belgium. 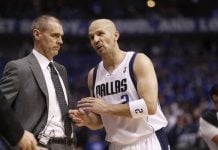