Serbia coach Dusan Ivkovic is sweating on the fitness of star point guard Milos Teodosic as his rehabilitation from a calf injury is still ongoing.

The CSKA Moscow player injured his left calf in late-May during a VTB League contest and was due to return to training in early-August through physiotherapy, but it was confirmed that his recovery process is going at a much slower rate than expected.

Teodosic, a former Euroleague MVP averaged 12 points a game last season for the Russian champions as his side finished third, beating Barcelona in the third-place game in London.

Power forward Stefan Bircevic however will not board the plane to Slovenia, the 23-year-old suffered an injury during training camp and is now unavailable. 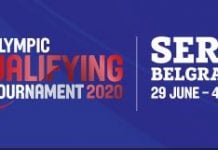 LeBron James weighs in on the GOAT debate