Eurobasket Women is entering the penultimate games of the second phase as the quarter-final line-up becomes more clearer. Today we head back to Lille and the second lot of games from Group E.

Italy showed an aggressive streak which worked in their favour as they defeated the Slovak Republic 58-47 in the day’s opener.

Giogria Sottana continued her good reign of form as she poured in 22 points off 6/13 shooting to beat the Slovaks who now edge closer to elimination. Italy’s chances of a spot in the last eight greatly improved as they reach third place.

Tied at 20-20 at the half, Italy then held a misfiring Slovakian side to just 9 points in the third as they established a 40-29 lead after three quarters and they never looked back.

Lucia Kupcikova had 12 points and 9 rebounds for the Slovaks.

Turkey overcame Sweden 72-51 as they continued their march onwards and leave the well-supported Swedes on the brink of elimination.

Only leading 31-26 at the half, Turkey underlined their superiority with a game-changing 13-0 run that their brave opponents could not come back from.

Isil Alben continues to have a fantastic tournament as her 15 points, 6 rebounds and 4 assists spearheaded Turkey to victory. Free scoring Frida Elbebrink led Sweden once again with 15 points, also.

A double-double of 21 points and 11 rebounds from Sancho Lyttle helped Spain comfortably past Montenegro 66-50 to close out the penultimate round of games from Group E.

Lyttle also added 4 steals to her impressive statline as Spain once again looked impressive. The day was made more memorable for veteran Amaya Valdamoro, as she celebrated a record 254th appearance for the Spaniards. 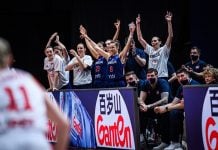 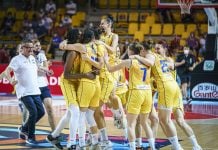