Phoenix Suns guard Devin Booker has paid tribute to his idol, Kobe Bryant, with a tattoo. The tattoo which Booker showed on his Instagram Tuesday, simply says “Be Legendary” in cursive writing on one of his forearms.

But it has a story behind it. Bryant wrote those words on a shoe of his that he gave to Booker after playing in a game against the Suns in 2016, Bryant’s final year in the NBA. Booker had Bryant’s writing on the shoe used for his tattoo.

The report first came from Jeremy Cluff from the Arizona Republic. Other notable NBA stars have a tribute to Kobe Bryant tattooed on them as well, including Los Angeles Lakers stars Anthony Davis and LeBron James.. 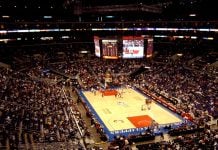