Tiago Splitter. The Former NBA champion (2014) and skilled big man from Brazil had a relatively short, yet eventful career in the NBA – but where is he now?

Splitter was drafted by the Spurs in 2007 with the 28 overall pick in the first round. However, he elected to remain in Europe and continued to progress his skill set before making the trip across the Atlantic to the NBA. Splitter arrived in 2010 and was immediately impactful to the Spurs on both ends of the floor.

In 2012, Splitter and Kawhi Leonard were both selected to play in the NBA Rising Stars game. Fast forward two years – Splitter and his Spurs squad upset the LeBron-led Heat to win the 2014 NBA Finals in sweeping fashion.

The big man suffered serious back and hip injuries and the injuries began to hinder his career post championship. He bounced around the league in a series of non-meaningful or impactful trades before announcing his formal retirement from professional basketball in 2017.

Splitter currently is a player development coach for the Brooklyn Nets, having received a promotion from pro scout in 2019. 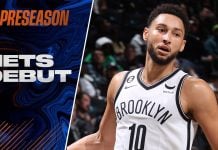 Goran Sasic: “Dejan Bodiroga is like a force that can fuse...