According to exclusive TalkBasket information, Zoran Dragic is seriously considering an offer from Caja Laboral.

Caja Laboral is willing to cover the player’s buyout of 100K euros and the player is eager to leave since Krka won’t compete in Euroleague, although they won the Slovenian league again.

His brother Goran was also owned by Caja Laboral, although playing for them only during the NBA lockout earlier in the season.

However Zoran wants to try his luck in the NBA summer league before settling for Caja Laboral. The only certain fact is that he will be leaving, since next season is his last contract year and the club won’t want to lose him for nothing in return. 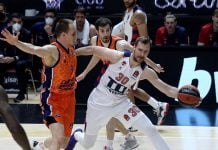 Zalgiris Kaunas reportedly close to a deal with Zoran Dragic