Miami Heat guard/forward Justise Winslow will remain sidelined for at least the next two weeks before being re-evaluated at the end of the month.

Winslow previously missed about a month with his back injury, but returned for a game on Jan. 8, where he re-aggravated the injury.

He left the team and visited a specialist this week.

The Heat who are currently the No. 2 seed in the East, are 21-8 without Winslow.

With young players like Tyler Herro, Kendrick Nunn and Duncan Robinson contributing this season, Winslow could be viewed as the team’s main trade piece. 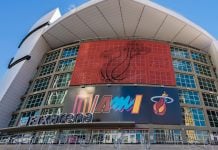