The surprise of the Russian Professional Basketball League last season Nizhny Novgorod signed J.R. Bremer for the point next season.

The former NBA All-Rookie has led the Russian League in assists over the past three seasons with a playoff record of 15 assists in one game this past playoff season.

Bremer took his former Russian team Krasnie Kriyila to the Eurcup Challenge Championship in 2010 and won the Spanish King’s Cup with Unicaja Malaga in 2005. Bremer now has the challenge to take a young Russian team into the Russian League, the VTB United league and the Eurocup Challenge. 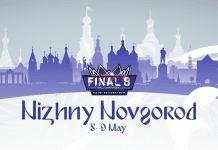