While in Paris during his promo tour for adidas, Dwight Howard sat down with French own REVERSE magazine for an interview in which he discussed many subjects : the way he felt after the end of the season, what it means to him to be the best defensive player of the league, how Dikembe Mutombo and Patrick Ewing have influenced him, what Hakeem Olajuwon taught him, what his aspirations are, the way the media treats the Magic and many more subjects.

About the NBA Finals:

“I didn’t watch none of the finals. I didn’t watch any game. I was upset about the whole thing and I just couldn’t watch. I got away from the game and just relaxed. I went to a secluded island and just laid on the beach and did pushups twice a day (laughter). I’m happy for Dirk Nowitzki, and I’m happy for Jason Kidd. He’s been playing for 68 years and he finally has a title (laughter). I’m also happy for Mark Cuban and the whole Dallas organization.”

About how the series against the Hawks have motivated him:

“Just not winning the title makes me want to go back to the gym and work more. I work extremely hard in the gym. I want to win a championship, that’s my motivation.”

About what it means to be the only player having been voted best defensive player in the league three years in a row:

“It’s very important for me. It’s been a goal of mine to be the best defensive player of the year. I don’t think that a lot of people recognize that as being something special, but to do it three times in a row and to be the only person to ever do it is very special to me. It’s a humbling experience. The reason why I started to step it up on the defensive end, I had a long talk with Dikembe Mutombo and Patrick Ewing one night at a restaurant. They told me that there’s no reason why – with my skills and the way I can jump and move – I can’t be the best defensive player of the year. I was very upset after that because I felt that they were talking bad about me, and I promised them that I was going to be the best defender. They also told me to not wait to try to accomplish great things and to try to do them now. It kinda just boosted me and gave me some fire to want to do these things, especially on the defensive end.”

About the way the media treats him and the Magic:

“I really think we get no love at all, to be honest. But that’s ok. We want to be respected by the teams we play and that’s the only thing that matters. The media can pick whoever they want to win the title, but the team that wins the title is the team that plays. The media doesn’t play a game. I’m pretty sure nobody thought that the Dallas Mavericks were ever going to win the title this year. It’s not about what anybody else says. It’s about what you believe. I believe in myself and in my team. We’ll bring our team to the top, then we will get some respect.”

About the comparison between Shaq and him:

“It’s happened to a lot of players. They compared Kobe to Jordan and Shaq to Kareem and Wilt Chamberlain. It happens in every generation. They find a player and they say ‘Hey, you play just like him so must want to be like him’. I think it’s a great comparison. We’re both dominant and we both like to have fun of the court and we both enjoy some of the same things. We’re both just funny, silly, we like to dance… We have a lot of the same characteristics. I don’t have a problem with it, being compared to somebody that great, but I’m my own man. I never looked at Shaq to make him a part of my life. This is who I am. I’ve been the same way my whole life before I even knew who Shaquille was.”

Dwight Howard: “At some point we just got to stand up and fight back” 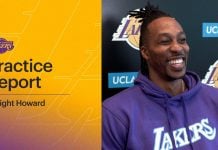 Dwight Howard returns to Lakers starting lineup vs the Grizzlies