The leading Australian betting operator, Tabcorp, in an exciting move, has signed a partnership agreement with the NBA. For starters, this agreement is important as it allows the Australian company to broadcast the US league games. In addition to the broadcasting rights, Tabcorp has also won the authorization to offer sports betting in Australia.

This deal followed a recent development when Tabcorp was able to sign a similar agreement with the NFL, National Football League. This collaboration is important both for Tabcorp and the NBA. The deal will enable the 24/7 TV channel of NBA to be available in more than 4,400 pubs, bars, and TAB betting outlets in Australia.

What’s more, the deal will also help the NBA fans catch all the live-action related to the US basketball games on ESPN via Foxtel. Additionally, fans can also stream online through the various paid options offered by the NBA.

The deal is a big-win for Tabcorp also because it made Tabcorp an official partner of the NBA in Australia. This is going to have an everlasting impact on the $10-billion gambling company and will enable it to use the official logos of the NBA on its website.

Tabcorp revealed that its customers are more passionate about betting on games associated with National Basketball Association than any other game, not even towards National Rugby League (NRL) and the Australian Football League (AFL).

Tabcorp further added that the NBA matches have contributed more to its income, increasing by more than 50% over the past five years, which is worth a mention.

The managing director of betting and media at Tabcorp, Adam Rytenskild, was spotted saying that our customers were inclined towards the NBA and this is why the newly-signed partnership agreement with the NBA is good news.

It is important to mention here that the company signed a similar agreement related to the broadcast and betting with the NFL. It was the first time that such a deal happened with American football league which also included a clause about betting.

To keep up with the trend, Tabcorp is now trying its best to have tighter relationships with sports codes to attract other broadcasting rights.

It is worth mentioning that this deal of the NBA with the Australian betting and gambling giant is a multi-year deal and is expected to last for years to come. This has made Tabcorp the official betting of the NFL in Australia. As an official partner of the NFL, Tabcorp’s Sky Channel will broadcast one NFL game every Monday during the season. 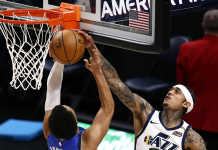