Anadolu Efes star Shane Larkin would seriously consider joining Croatia national team if there was such opportunity, according to basketball.hr.

The 26-year-old American led his club to the EuroLeague final and could be leading Croatia in one of Olympic Qualifying Tournaments (OQT). Croatia failed to qualify for the FIBA Basketball World Cup 2019 but will enter OQT due to their FIBA ranking.

It is reported that Croatia head coach Veljko Mrsic admires Larkin’s talent and is interested in a possibility of getting him on the national team.

Naturally, Larkin would prefer playing for his homeland, the United States. But if not, representing Croatia and participating in Olympics Games, should Croatia get there, is something he would be interested in:

“Yes, it would definitely be nice to play in the Olympics. It’s every athlete’s dream. Of course I would prefer playing for the USA, but given the situation, I am definitely open to the idea of ​​playing for Croatia. This is something I should think about very well this season.” 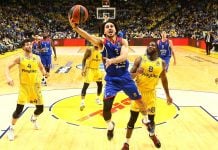