Alexey Shved had another scoring eruption as Khimki used a third-quarter surge to beat the visiting UNICS Kazan 78-65 and move into first place in the VTB United league standings with a perfect 5-0 record.

Despite making only 40 percent of his shots from the field, Shved traditionally led all scorers with 24 points, as Khimki handed UNICS its first loss of the season in Sunday’s league derby.

In the opening minutes, Pyotr Gubanov and Maurice Ndour traded baskets before Khimki went on a 10-2 run to build the biggest lead in the first half, 12-4. UNICS fought back, as Jamar Smith provided the scoring punch off the bench and Artyom Klimenko built a towering presence in the paint.

At halftime, it was still an one-possession game, as the hosts led 32-29. But, everything changed in the third quarter, when Khimki’s shooters tore UNICS’ defense to shreds during a 20-6 run, capped by a 12-point spree that went unanswered.

When Jordan Mickey nailed a three-pointer to stretch the lead to 17 (52-35), the game was effectively decided. The former Celtic was on fire in the third period, scoring all of his 13 points in less than six minutes and demonstrating a dazzling display of offensive weapons that included an alley-oop dunk and a three-pointer.

Shved provided scoring support despite his struggle to make shots, and stopped at 24 on 8-of-20 shooting from the field. He added five assists – most by any player on the floor – but also had a game-high six turnovers.

On the Khimki team, the other scorers in double digits were Tony Crocker with 13 points and Vyacheslav Zaitsev with 10.

Errick McCollum and Smith scored 12 points apiece for UNICS, and Klimenko had a game-high seven rebounds. 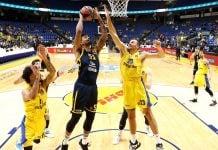