Jordan Mickey is expected to remain in Russia and sign a contract with Zenit Saint Petersburg, according to Eurohoops.net.

Per the report, Mickey has agreed to an one-year deal with Zenit, which will keep him in the team until the end of the 2021/22 season.

Mickey received interest from several EuroLeague teams, however he chose to join Zenit and is expected to have a significant role next season. 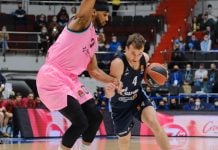