Lithuania became the fourth European team that advanced to the World Cup, while Spain edged Latvia at home.

The Lithuanians beat the Netherlands in double overtime to remain undefeated (8-0) and seal their ticket for China.

Mantas Kalnietis’ three-pointer, with five seconds to go, gave Lithuania the victory (95-93) and the qualification to the World Cup.

🇱🇹 Lithuania are going to China! @Musukrepsinis is the 4th European team to qualify for the FIBA Basketball World Cup 2019.#FIBAWC pic.twitter.com/BgjxnRdEQy

Latvia came back from an 18-point deficit, yet Quino Colom’s two-pointer helped Spain edge the visitors (85-82) and come closer to advancing to the World Cup.

Colom scored a team-high 18 points and the Spaniards improved their record to 7-1. On the other hand, Janis Timma and Janis Strelnieks scored 20 points each for Latvia, who dropped to 5-3 in the standings. 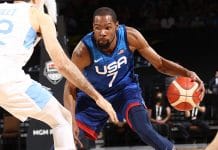