Vassilis Spanoulis gave an interview to “K” magazine which comes with the Sunday edition of “Kathimerini” newspaper, talking about the NBA, the upcoming birth of his first child and other subjects.

You have to be tired after so many sportive obligations both with the National Team and Panathinaikos.

– I will need an adjusting period as it is not easy to put out the same energy every night, especially at the beginning of the season. But I am a professional basketball player. There is not much time for rest, but this is my life. I love what I do a lot, so I just switch off.

That’s the physical part… How do you cope with stress?

-I learned to live with it. And that’s one of the major attributes that a professional athlete has to develop. Pressure makes you better sometimes.

How is your everyday life?

-Most days we have double practices. I am the calm type so I enjoy the simple things that make me forget about the routine of a day full of basketball for a while. Maybe go for a coffee after practice, go to the movies or have a drink. Not up late, cause we’re on curfew.

Is your schedule determined in your contracts?

-No, not in the contracts. But when the season starts, it is forbidden to go out after some point. Each coach’s standards, the management and the club’s dynamic determine the lifestyle you ought to lead. But these are inner functions of a team and need to stay like this.

Are you having troubles with this discipline?

Not at all. I have learned to practice it even without being asked to. I have understood the simple rule that the better you train the better you play. I regard training as a personal matter too. I come to the arena even in days that we have off, I do some weight lifting, I take my shots and try to improve aspects of my game.

Tell us a strong and a weak attribute of your game.

-I probably have lots of both. I prefer the fans to recognize the strong ones, as I wouldn’t like for my opponents to read my weak attributes!! (laughs) In any case I would like to improve my consistency within a game, to have less ups and downs.

You are probably going to need even more self-discipline now that you’re about to become a dad.

-It is something that I wanted a lot. Me and my wife as well. We can’t wait.

-Everybody tries to raise their kids, “copying” from how they were raised. I figure though that my paternal behaviour will just pop up when the time comes. My parents supported me when I decided to devote my life to basketball at a very young age. I would like to do the same, support my child in its decisions.

You are very successful at what you do as is your beautiful wife (2006 winner of Greek beauty pageant, Olympia Hopsonidou). Does your life together “rationalize” your personal fame?

We are very good with each other, understanding that being both well-known there are some special situations. I try to lead a simple life, keeping my peronal life away from the public. It is a true blessing for anyone who makes a living out of their hobby, making people happy and being financially independent. But success hasn’t changed me, I still have the same friends. Success comes and goes anyway. I have a moto in my life: you shouldn’t get overly excited with success, nor overly disspaointed with failure. So I always try to keep a balance with myself and with my partner.

When did you realize that you could play professional basketball?

-At fourteen I had already decided to seriously try and make it as a professional basketball player.

Did you dream about the NBA since back then?

-Yes, it was a childhood dream for me. And for others of my generation too that grew up with Michael Jordan. When I decided to try it, I acted rather sentimentally than logically.

Do you regret it?

-No. I gained a lot of experience there. I worked on a personal level a lot and the dificulties matured me.

Is it something you would like to try again?

-On the contrary I broke the spell. I still have a year’s contract with Panathinaikos and I am happy and gracious to be here. In the US I found a game and life style that are not representative for me. Everything was way different than I expected

What did you dislike the most?

-In the US everything is business, everything happens for the show and entertainment. Basketball-wise the only thing worth in the NBA are the playoffs. The whole first part of the championship is like an ad for the playoffs. In Europe you have to win every game, thus play in a way that is closer to the essence of basketball. Over there it’s run and gun, each team has 2-3 superstars and the rest revolves around them.

Which player impressed you?

-Kobe Bryant. His competitiveness, his sportive egoism, his winning spirit and his basketball IQ are unique.

-Life in the US was a tragedy for me. Americans don’t have buddies to do stuff with, they are programmed to work from 6 in the morning till 8 at night. Then they go to bed. I couldn’t live like that.

Did you feel lonely?

-I wouldn’t call it loneliness… I am as most athletes too lonely by nature for it to bother me. Maybe it was the specific team and city. Houston belongs to Texas which is “hardcore” America. In a east-coast city, life is more European. In Houston you had to have your coffee at some mall, you could barely walk on the street. The humidity was terrible. I felt like I couldn’t breathe.

From Houston’s bench to being the leader of the NT…

-Many people called me that and it surely is an honour, yet I can’t accept it. I tried to do what I try to do every time: help the team reach its goals. It’s just that due to the absences of Dimitris and Theo, I took more shots. I had more responsibilities in the game because I had to play for them too.

How different is coach Kazlauskas than coach Giannakis?

-I wouldn’t like to compare them. Kazlauskas is a representative of the Lithuanian school. He teaches a way of basketball that is more simple, more free, with no complex systems, based on good and quick ball rotation. We had a good time with him for one and a half month as it was also seen on the court.

-After ten years and so many successes, his philosophy is embeded in the DNA of the team. He is the “Ferguson” case… On the coaching level, he helps each athlete to improve a level, “forces” mutual respect and enhances our sportive motive. I think it is obvious from our first games this season that despite last season’s Triple Crown, the team still wants to win every game. As a person, Obradovic has the talent to give you advice and to joke around with you, keeping the border lines between a coach and a player visible.

How does an athlete of the basketball department of Panathinaikos feel?

-Possible like a football player in Barca or Real. (laughs) The amazing thing in Panathinaikos is the constant support of the management -Giannakopoulos brothers even watch our training sessions – and the possibility the club gives you to win every title. Practice alone here, in this arena under all those banners that mean voctories and trophies, fills you with feelings and responsibility for the jersey you wear.

What more do you wish for yourself?

-Only to continue. Be healthy, play and win. 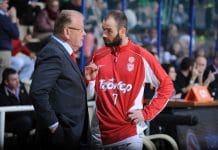 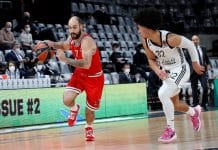