Surrey Scorchers captain and sneaker enthusiast Tayo Ogedengbe received a phone call one night regarding a pair of sneakers that he might have been interested in. A pair of 2017 Nike Hyperdunks, but whilst grateful to cop a pair, Ogendengbe did not exactly jump up in excitement at first.

While it is a clean sneaker, last year’s headline basketball shoe marked with the infamous swoosh in the middle has been commonly used, beginning with Golden State Warriors forward Draymond Green during last year’s NBA Finals and worn since by a who’s who of athletes, including Real Madrid’s Luka Doncic.

‘I got a call and the connect, a friend of mine said if I liked the latest Nike Hyperdunks and if I wanted them?” said Ogedengbe. “But at the time, he didn’t mention what they were to me.”

Ogedengbe’s friend also added that if he wanted this particular pair of Hyperdunks, then the only stipulation in place was that he was to wear them on the court. A motion that the Scorchers forward was happy with. Rule one of a sneaker lover: Wear your kicks.

Then the friend, who Tayo said had good connections with Nike, revealed that they were the limited off-whites.

“I lost it,” Ogedengbe remembers.

“I wondered why my friend was hyping about these particular shoes and then he mentioned the off-white Hyperdunks, man, I nearly lost my mind. I was so blessed to pick up these shoes and then I thought to myself that I had to honour our agreement and I had to wear them. I nearly felt disappointed. But in a good way,” he said laughing.

Ogedengbe revealed that he was one of literally thousands of devotees that entered countless raffles, submitted his name in competitions and made phone calls to various friends but was unsuccessful in his quest for the series of the off-whites, which included the Air Max 97, Prestos, Blazers and more notably, the Air Jordan 1. The shoes themselves went like gold dust: they vanished and within hours, arrived back on the selling pages at resell prices.

The Londoner though, with a size 12 pair on his feet made good on his promise and rocked the shoe on court up at Newcastle in December. “I always play hard and at 100 percent, and the shoe isn’t the most comfortable the longer you wear it, but because of what they were, I seriously didn’t want to mess up my off-whites,” Ogedengbe joked.

“But with every shoe I have, I do make sure that I wear them. I know certain people deadstock their grails, and never wear them but not me. I feel a true sneakerhead wears his shoes. Whether I would rock these off-whites on court again, I’m not sure.”

The hunt for sneakers used to be a normal trait in days gone by for Ogedengbe who boasts an impressive collection of roughly 150 pairs, including seven pairs used to play and practice in each day, but as time as gone, the quest has been put on the shelf permanently as he became a father for the first time in 2016.

But Ogedengbe still reads, still looks for release dates, then followed by a swift look at the bank balance. The love of shoes and fashion in general still resides within him. And with the world of fashion and in particular sneakers ever evolving, the passion doesn’t go away.

And in December 2016, Ogedengbe, now a dad, read up on the re-release of the Space Jam Jordan XI and his thought process immediately went back to when he was a kid.

“Space Jam was the film that not only started my love affair with basketball, but in a way, started my love for shoes as well,” Ogedengbe recalls. “I watched that film when it came out in 1996 and I was hooked on the game but I also looked at Michael Jordan’s shoes as well. Back then I knew about the Jordan Brand a little and that MJ wore amazing shoes on the court, but I saw what shoes he had on in the film and I wanted them.”

The Space Jam XI is undoubtedly the most popular Jordan shoe ever made. Such was the movie’s appeal back then that when the shoe released during the Christmas holidays in 2016, a traditional time for the XIs to come out and everyone lost it. The shoe sold out quickly, just like it did when it was retroed in 2009 and Ogedengbe knew that he needed to relive that part of his childhood and put them on his feet – literally – regardless of the bank balance.

If you know me you will know how much this means 2 me 😊#SpaceJam #spacejam11s pic.twitter.com/srOTtLJDjy

But Ogedengbe admits that while he boasts arguably the most impressive collection of footwear in the Surrey Scorchers locker room, he doesn’t influence his team-mates, at least he doesn’t think that he does, anyway.

“Oh, man, you need to ask them, I don’t think I do but I think of myself as the team’s trend-setter,” he said with a smile. “But I love fashion in general and sneakers goes hand in hand with basketball.

“In honesty, I don’t know say a handful of ballers that are not in love with different pairs. Everyone in the BBL that I know, loves shoes and I’m just one of them.”

That love though doesn’t just stop at Jordan and Nike, though Ogedengbe admits to wearing them 90 percent of the time. The veteran forward is a fan of Yeezys “Who isn’t?” he questions. “They are the most sought-after shoes out there, and have been for years. Kanye has made the ‘Boost’ technology what it is and while I feel that the Yeezys will be a popular seller for years to come. I still don’t believe they will ever be as timeless as Jordans.”

To this day, Ogedengbe still gets pairs from other brands. Recently, he remembers getting a pair of the latest Li-Ning “Way of Wade” shoe amongst others. But while good, Ogedengbe says they won’t rival Nike.

“I get to try on different brands but as far as basketball shoes go… nothing compares to Nike,” Ogedengbe says. “Adidas have the comfort sorted out on their street shoes, but as far as basketball shoes go, they are clumpy and heavy. I got a pair of the Dwyane Wade Li-Ning’s a while back, which look nice but were not the most comfortable to play in, compared to Nike. They were okay to wear off the court though. But Nike for me is king.” 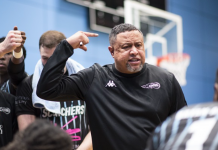