It’s no secret that NBA players train hard in order to maintain their high skill set. Staying way beyond the end of the scheduled practice time jut to perfect their craft.

After winning the NBA championship and claiming Finals MVP in 2011, Nowitzki walked straight from the champagne-drenched locker room in Miami and into the German camp as he prepared for Eurobasket in Lithuania, determined to help his nation reach the 2012 London Olympics.

Unfortunately, a clearly fatigued Nowitzki and Germany were dumped out of Eurobasket in the second round. The Wurzburg native tried again last summer in front of a home audience but failed to get out of the group phase.

Despite the short comings since winning the NBA crown in 2011, Nowitzki still comes back for more.

“I coached Dirk in Dallas and he is probably one of the most consummate pros that has ever played in the NBA,” said current Toronto Raptors coach Dwane Casey, who was the assistant coach of the Mavericks from 2007 to 2011.

“He has made himself into a great player, he’s probably worked as hard as any superstar I’ve been around: he would come back at night, ten o’clock at night and work, we almost had to put a lock on the door to keep him out of the gym, because he would wear himself out so much that he would have to play so many games.

“He made himself into one of the greatest three-point shooters in the NBA and he will definitely be in hall of fame at some point.”

“He is the perfect professional, something only us players see, but he takes a lot of pride in what he does,” Germany team-mate and Zaragoza forward Robin Benzing commented.

“He will always be remembered in Germany and indeed the basketball world over, and I know that he isn’t ready to go away just yet.”

And just recently, Nowitzki moved to sixth in the all-time NBA scoring list, passing Shaquille O’Neal when he buried a baseline jumper against the Brooklyn Nets.

Proof that hard work most definitely pays off. 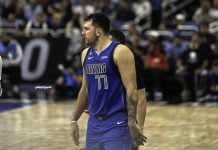 Dillon Brooks: “[Shannon Sharpe] should have never came back in the...