Reigning two-time NBA MVP Nikola Jokic made history against the Thunder as he broke a record of the legendary Wilt Chamberlain.

The 27-year-old Serbian center finished the game with a triple-double of 15 points, 13 rebounds and 14 assists in 36 minutes of play. After the game he was asked how he feels about breaking Chamberlain’s record for the most triple-doubles as a center

“It’s nice,” Jokic said. “Just to be compared with a guy who is probably one of the best ever. It’s some kind of legacy probably that I leave behind, so it’s nice.” 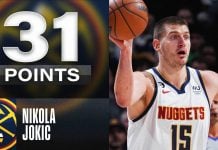