The NBA is retiring Bill Russell’s number, but Hall of Famer Ben Wallace wants to see the league do the opposite on opening night … telling TMZ Sports it would be awesome to have every player wear #6 in honor of the late Celtics legend:

“I don’t think it’s a problem with them wearing number six. They couldn’t foresee the passing of Mr. Russell,” Wallace said. 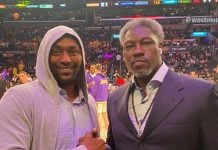 Metta Sandiford-Artest reveals one issue he has with Ben Wallace, and it is not the ‘Malice at the Palace’