The Dallas Mavericks veteran wing Reggie Bullock accidentally became part of NBA trade rumors, could he be heading to the Philadelphia 76ers?

Locked On Mavericks’ Nick Angstadt and Isaac Harris discuss potential Reggie Bullock trades to the Sixers and why that became a rumor.

Would a trade centered around Tobias Harris and Matisse Thybulle be a good move for the Mavs?

Then they discuss rookie Jaden Hardy and what his role on the Mavericks looks like at this point in the offseason.

Are the Dallas Mavericks showing faith in him by not adding another ball handler? 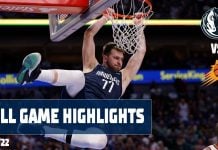 Reggie Bullock on Chris Paul, Devin Booker trash talking Luka Doncic: “I laugh at it when they try to guard him”

Lakers have Reggie Bullock on the list of potential additions, per report