The Milwaukee Bucks regain the lead (2-1) in the Eastern Conference semifinals by beating the Boston Celtic 103-101 on Saturday. Game 4 is set for Monday night in Milwaukee.

Following the game, the Celtics star guard Marcus Smart talked about the late foul: “It’s not like he got me when it was down low. I was already in my shooting motion. I thought it should of been three (free throws) … It wouldn’t make sense to do a rip-through move behind the 3-point line when you’ve got a clear shot down three.” 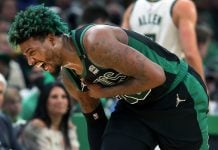 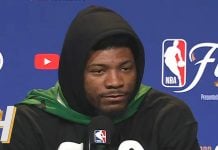 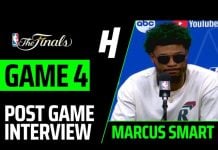 Marcus Smart on Game 4: “We just didn’t execute late down the stretch” Marcus Smart: “I’m constantly talking to Rob, just from the simple fact that I know what he’s going through”