Draymond Green returned to action on Monday after being out for more than 2 months with an injury. Before the injury the three-time NBA champion was confident that he is leading the Defensive Player of the Year race.

After the game against the Wizards he was asked by Mark Haynes if he still thinks he could get the award. “When I look around the league Mikal Bridges has been really good defensively, and Jaren Jackson has picked it up defensively,” Green said.

“But I don’t think anyone has solidified themselves. I think we can all agree through 32 games it was already solidified. So yeah, I think I can win.” 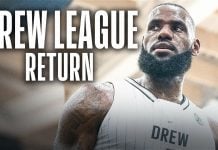