Klay Thompson is set for his long-awaited return to the court, aiming to help the Golden State Warriors increase their title chances.

It has been more than 935 days since Klay Thompson last played an NBA game. The last time he appeared on the court was Game 6 of the 2019 NBA Finals. Since then, a couple of serious injuries sidelined him for almost two and a half years.

Now, fully recovered, the three-time NBA champion could make his season debut as early as Sunday. The Warriors are hopeful Thompson will be in the lineup for the home game vs the Cleveland Cavaliers.

A few days ago, the All-Star guard said he will need a few weeks to return to form. But, he made it clear he has his sights set on making the Warriors an NBA champion once again.

For his part, Golden State head coach Steve Kerr has no plans to bring his player off the bench. The veteran coach said Klay Thompson will start for the Warriors.

The return of Klay Thompson solidifies Golden State’s place among the title favorites. The Warriors currently possess the best record in the league, at 29-8. Stephen Curry and Andrew Wiggins have been unstoppable, while Draymond Green does everything on both ends.

Certainly, the addition of Thompson will give the Warriors extra firepower, even though coach Kerr will need to redistribute the roles. The team has showed they are capable of returning to the title picture and are among the odds-on favorites.

With the All-Star guard back, the Warriors increase their betting chances to win their fourth title in the last eight years. Despite the presence of excellent teams in the East and West, Golden State is ready for another title run.

According to sportsbettingdime.com, the Warriors price continues to shorten (+460). But, with Kyrie Irving making his return, we could see odds shift significantly for the first time in months.

Golden State will return to San Francisco on Friday, following a two-game road trip. Afterwards, they will make their final decision on whether Klay Thompson will play Sunday. For the time being, this scenario is more than likely to happen. 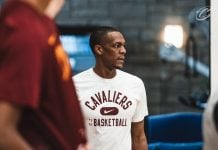 Ja Morant on going against bigger opponents after Grizzlies’ win over Cavs: “I don’t fear nobody, I’m coming straight at you”

Gary Payton II’s contract to be guaranteed for the rest of...

Frank Vogel says the Lakers are ‘excited’ to have Stanley Johnson

Goran Dragic would reportedly love nothing more than to return to...

LeBron James on his birthday: “I literally sat on the couch”