Head coach Mike Budenholzer also landed on the NBA COVID protocols on Wednesday. Milwaukee will be without its head coach and several guards as it heads to the Barclays Center to take on the Nets Friday.

The Bucks signed Langston Galloway as a way to bolster their guard position, but Javonte Smart is basically their only remaining clear-cut “point guard”.

Holiday, 31, is coming off his most successful NBA season, playing a pivotal role in Milwaukee’s 2020-21 NBA championship. He was also a huge part of Team USA, which won the Olympiac gold medal in Tokyo last summer. 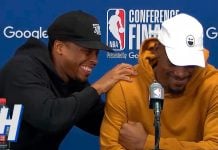