Stephen Curry made NBA history at Madison Square Garden by surpassing Ray Allen for the most three-pointers in NBA history.

Curry reached the milestone in the opening quarter of the clash between the Golden State Warriors and the New York Knicks on Tuesday. He hit a pair of three-pointers early in the first quarter and broke Allen’s record.

Stephen Curry has now made 2,974 three-pointers, while Allen hit 2,973 three-pointers during his legendary career. Allen held the record for 10 years. 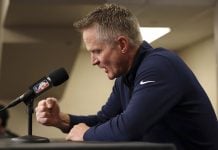