Some players of the Portland Trail Blazers became part of the Neil Olshey investigation.

As per Chris Haynes of Yahoo Sports, the chosen cagers were contacted for an interview by the firm O’Melveny & Myers as part of the data gathering to determine the accusations being thrown against Olshey. Sources also said they will also inquire further whether these players have experienced unpleasant conditions around the mentioned basketball operations team president.

Haynes also reported that, currently, the study being conducted is inclined on former and present staff members of the franchise.

The insider further detailed via his source that, since the Blazers released the news last week that they will look into the accusations, Oshley frequently encounters the team officials who issued their concerns against him in training facilities.

Moreover, Friday morning is rumored to be the time wherein the franchise will announce its decision regarding Olshey’s case.

Olshey has been a subject of investigation by the Blazers since November 6 after the toxic, hostile work environment claims of their team members.

Lakers players call out team effort in loss to Blazers 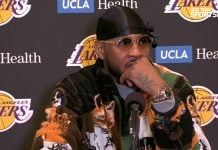 Carmelo Anthony after Lakers’ collapse vs Blazers: “For the most part tonight we didn’t play basketball”

Do you think Melo has a legit shot at winning Sixth...

JJ Redick on LeBron’s injury: “This is the first time he...