The game between the Utah Jazz and Indiana Pacers was marked by a fight between Rudy Gobert and Myles Turner, which involved more players from other teams.

It started with Turner’s attempt to block Gobert, who grabbed the Pacers center’s shirt as he was falling out of bounds. The incident led to ejection of Jazz star Donovan Mitchell. After the game, he put blame on the referees for letting things escalate.

“It’s really at a point now where the refs are letting it get out of hand. … Have this energy in the first quarter,” Mitchell said, via Eric Walden. 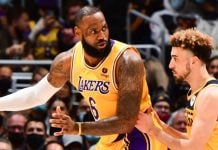