Shai Gilgeous-Alexander dropped 28 points as he led the Oklahoma City Thunder past the Los Angeles Lakers. It was OKC’s second win over the purple and gold this season.

When talking about the game, Lakers center DeAndre Jordan praised Gilgeous-Alexander. “Shai’s a hell of a player, you know what I’m saying?” he said. “He’s playing great basketball right now. He’s able to penetrate defenses and get guys open and things like that.”

This season, the 23-year-old point guard is averaging 23.5 points, 4.9 rebounds and 3.9 assists per game for the Thunder.

Doc Rivers: “We like DJ, we’re going to keep starting him” DeAndre Jordan confirmed he asked to be waived by the Lakers 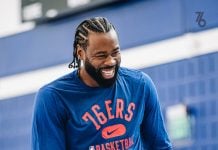 DeAndre Jordan on Doc Rivers: “He’s the best coach I’ve ever had”

DeAndre Jordan is expected to sign with the Sixers