Oct. 22, 2021 – Last night, the Official Spirit of the NBA coursed through London, as Hennessy, the world’s best-selling cognac, brought its global partnership with the National Basketball Association (NBA) to the capital, celebrating with a tip-off party at a secret central London location. Marking the start of the NBA’s 75th Anniversary Season, the iconic London institution was transformed into a basketball court for the first time in its history for an evening honouring the game’s impact on UK culture, both on and off the court.

Dynamic and exciting for both NBA fans and brand-lovers alike, the party set the scene to capture the culture of the NBA in its distinctly London context, timed to coincide with the start of the 2021-22 NBA season, which tipped off on Oct. 19. Throughout the evening, guests enjoyed Hennessy cocktails and were treated to American street food, in a nod to the NBA’s homeland. They were greeted by a dedicated message from eight-time NBA All-Star Vince Carter and had the opportunity to meet three-time NBA Champion Bruce Bowen, try their hand at ‘pop-a-shot’, cast their predictions for the season, and take photos with the Larry O’Brien NBA Championship Trophy.

As part of the ongoing celebrations, the Spirit of the NBA festivities will continue at Boxpark Shoreditch, where basketball fans will be invited to toast the new season by shooting some hoops with friends, winning exclusive prizes and grabbing a drink at the Hennessy x NBA pop-up game bar from Oct. 27 – 31. 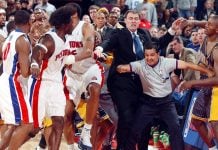 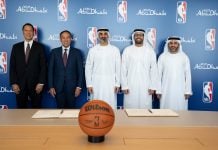 Jamal Murray still ways away from season debut with the Nuggets

Kendrick Nunn still ‘ways away’ from returning to Lakers lineup

Russell Westbrook had his best game with the Lakers, according to...

Warriors the only team to score 100+ points in every game...