Shamet joined Phoenix this past offseason, after playing for the Brooklyn Nets last year. The deal is worth $43 million, according to the report.

The 24-year-old has bounced around the NBA since entering the league as the 26th overall pick, having already spent time with the Sixers, Clippers, and Nets.

He had a positive impact on the teams he played, being a reliable outside shooter and knocking down 39.7 percent of his attempts from deep.

Now, the Suns have “locked up” most of their core on multiyear deals, outside Deandre Ayton, who will probably become a restricted free agent next offseason. 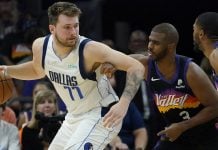 Erik Spoelstra believes Heat will turn their shooting struggles around in...