When Lou Williams was traded to the Atlanta Hawks by the Los Angeles Clippers this past season, he seriously contemplated retiring. In the end, the 34-year-old shooting guard found his place in Atlanta and helped the team go all the way to the Eastern Conference Finals against all odds.

Williams, who was named the Sixth Man of the Year three times, recently agreed to a one-year deal with the Hawks, worth $5 million. He had offers from other teams, but decided to stay in Atlanta.

According to Michael Scotto of HoopsHype, Williams turned down offers from the Los Angeles Lakers, Golden State Warriors and Milwaukee Bucks.

LeBron James on what Russell Westbrook brings to Lakers game 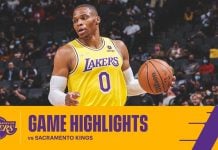 Lakers are close to being ready for the season, says Robert Horry

Lakers are close to being ready for the season, says Robert...