Jerami Grant’s long basketball journey from being a second-round pick in 2014 to now earning a spot on this year’s USA Olympic team has been quite the ride. Grant developed his game season by season with Philadelphia, OKC, and Denver before signing with the Detroit Pistons this past off-season, where he put up a career high 22.3 PPG. The 27-year-old described how trusting the process has helped mold him into the player he is today when he talked to the media at Team USA practice in Las Vegas.

“I think I had to trust the process. I think that’s how my career kind of unfolded. I came into the NBA as a second-round pick at #39 and was on a team with a bunch of lottery picks. I didn’t have an opportunity to really show what I could do on the offensive end, so I had to make my niche on the defensive end by blocking shots, playing defense, and guarding my man. I had to do a lot of work so things would pan out. I had to trust the process, and seven years later I’m here on the USA team. It unfolded the way it should and I’m blessed.” 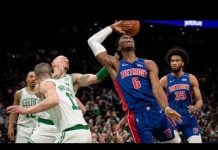