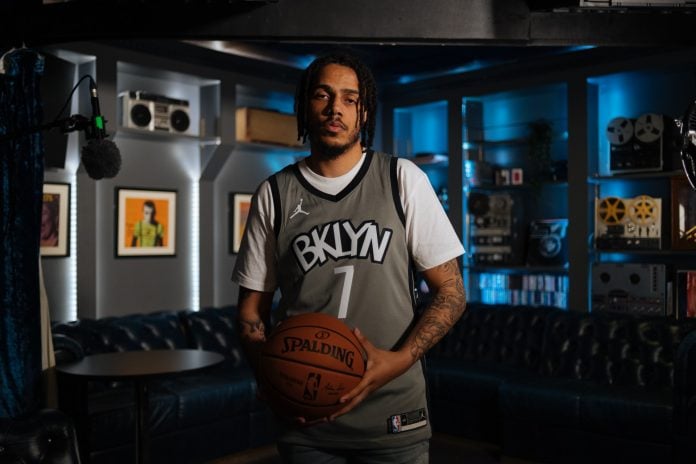 The NBA has today unveiled “That’s Game”, its new global brand campaign which will tip off at the start of the 2021 NBA Playoffs. In the UK, the campaign is narrated by rapper, songwriter and producer AJ Tracey.

Q: Can you tell us what it is about the NBA that you like the most?

AJ: I like the drama, the excitement, the energy, there’s a certain type of energy that you can only get from the NBA. It’s one of a kind, very unique. For me, as someone from the UK, it’s a window into what is going on in the US. It’s not an energy that I’ve ever experienced being by myself, being a solo artist, being on stage. Being part of a team and winning as a team is not something that I’m used to so it’s good for me to get an insight. That’s what I like about the NBA.

AJ: As a young boy, my dad introduced me to Michael Jordan and the Bulls. Most people growing up as an ethnic youth, we wanted to play basketball or enjoy sports at that time. I’m 27, so that was the age to be a fan of the Bulls – that’s a no brainer. Even if you’re not into basketball, that would have been something that you’re into, to look up to Michael Jordan.

Later on in life, being a tall person, people encouraged me to play basketball – I didn’t really ever get into it, but I have a lot of friends from Toronto and they go me to follow the Raptors. Having a lot of friends from Toronto, really put me onto the Raptors and then KD [Kevin Durant] followed me, so that’s my guy now automatically. He messaged me about my music, so I think that the whole culture, through US rap, helped get me into the NBA as well. I’ve never been to a game, but I’ve been able to go over there and be around people who play and live that culture and embrace it a bit more.

Q: What’s your favourite team and why? Do you closely follow the games?

AJ: My favourite team, would have to be the Raptors, just because I have such a close tie with them and a lot of people around them, obviously Drake as well. That’s his team, that’s my guy, it’s going to have to be that. As an honourable mention, I do really do like KD, he’s a ridiculous shooter. Anywhere he goes, I’m going to support him and give him a little bit of love.

AJ: My favourite player, from the past is probably AI [Allen Iverson]. The way he played was ridiculous. He had so much flare, so much technique. He brought a certain swagger to the game, the way he played was very captivating. I would say AI is probably my favourite one. Honourable mention to [Dennis] Rodman, a ridiculous player and obviously very wild. I enjoyed that very much, the way he [Rodman] played and the story that goes with it. Not just what was done on the court, but off the court as well, he’s amazing. Another honourable mention to Toni Kukoc, for taking responsibility on his shoulders when it was time, he did his thing, and he deserves to be in the Hall of Fame. We should try and get him in there.

Q: Is there anything in particular about the NBA as a league or the players that you admire – On or off the court?

AJ: The thing I admire about the NBA, on and off the court is players’ dedication. You have to be dedicated to the game. It’s obviously a very hard craft to learn and to perfect. They obviously spend their whole lives dedicated to this one sport. I admire that a lot. Obviously being a musician, I’ve had to do the same for music, so that’s very close to me. Having to travel if you change teams and America’s so big, you could be in a hot climate and have to move to a freezing cold one, like Toronto. Or, you might have to move down to Florida, you might have to move climate, you might have to change living circumstances. You have to make your whole life fit around this craft that you’re learning and trying to perfect. I admire the capability of trying to adapt yourself.

Q: In your own words, what does the NBA represent and mean to you?

AJ: Triumph man. It’s triumph. It’s like the hard work pays off no matter what you can see because as long as you put in the hours, you put in the time, the dedication, you’re going to get your rewards back. Whether that be in the shape of a ring, notoriety or just being recognised as one of the greats in the NBA. It’s a great sport and it’s something we can all learn from even if you don’t play basketball or you’re not into sports. You can definitely learn a thing or two from the NBA.

Q: If you pick an NBA player to feature in one of your future tracks, who and why?

AJ: It would have to be LeBron James because he is so into hip hop. The way he is rapping along to peoples’ songs, he can rap himself. You can tell the way someone raps along to a song, if they have rhythm or not. I feel like he would be good on the track.

Q: What’s the UK hip hop scene like in term of ‘ballers’? Can you pick someone who plays?

AJ: The only one who plays basketball is Aitch. He’s the only one. It’s one person on the team. We’ll work on changing that though, that’s what we’re here for. Stormzy should be good, look at how tall he is.

JaVale McGee on playing with LeBron over Steph, says LeBron is a ‘player-coach’

Philadelphia 76ers reportedly not interested in taking back Kevin Love in...