Although the Hoopers had a promising start, they struggled to adjust to the Patriots’ aggressive defence.

And turning the ball over 20 times didn’t help.

Wilson Nshobozwabyosenumukiza, who came off the bench, and Prince Ibeh led the Patriots comeback, and the Nigerians couldn’t find any answers.

And to make matters worse for the Hoopers, they got in foul trouble early in the second quarter, and things were never the same.

Nshobozwabyosenumukiza, who established a record for most steals in a single game in the FIBA AfroBasket Qualifiers in February, proved crucial defensively on Sunday, making the Hoopers look helpless.

Trailing 18-17 at the end of the first quarter, Ibeh thought it was about time to turn things around.

Ibeh’s two thunderous dunks early in the second quarter ignited the Patriots to a 13-0 run as the hosts took absolute control of the game, and they never looked back, leading at one point by as many as 29 points.

Costner Brandon led all scorers with 20 points and Ibeh contributed 11 points, 11 rebounds and 3 blocked shots in the winning cause.

“We played good inside, we limited a lot of inside points and we took advantage of the turnover that they had,” the Rwandan international said, adding that “it feels good to start the BAL with a victory.”

Talking about Ibeh’s performance, Gasana added: “He’s a beast, I loved the way he played. He really protected the paint.”

Taren Sullivan did a bit of everything trying to keep the Rivers in the game, but his team-high 15 points weren’t good enough to avoid the Nigerians’ defeat.

Patriots resume their Group A campaign on Tuesday, facing Madagascar’s GNBC, a team they beat twice in the BAL Qualifiers.

Meanwhile the Hoopers return to action on Wednesday against Tunisian champions US Monastir. 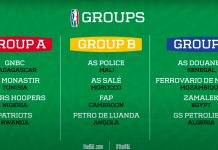 Sergey Karasev returns to Zenit on a one-year deal