Brooklyn Nets will sign scoring guard Mike James for the rest of the season, once his second 10-day contract comes to an end, per Eurohoops.

His second 10-day contract will expire on May 13. James has seven appearances with the Nets averaging 6.7 points and 3.6 assists.

The veteran guard started the season with CSKA Moscow, before the club suspended him indefinitely after an incident with head coach Dimitris Itoudis back in March.

The EuroLeague giant decided to release James later in April for him to come in an agreement with Brooklyn. 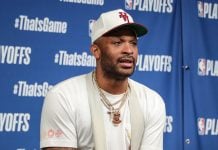 Charles Barkley on Bucks in Game 5 vs. Nets: “That was awful basketball”