Minnesota Timberwolves’ Anthony Edwards and Toronto Raptors’ Malachi Flynn have been named Western and Eastern Conference Rookies of the Month, respectively, for April.

The award was for games from April 1 to April 30.

This is the second time that Edwards has won the award this season, as he won in March, while this is Flynn’s first time winning the award.

The 22-year-old becomes the ninth player in franchise history to earn the honor and the first since Jonas Valanciunas in March 2013.

During the month, Flynn scored a career-high 22 points on April 13 against the Atlanta Hawks and also recorded his first career double-double with 20 points and 11 assists on April 10 against the Cleveland Cavaliers. 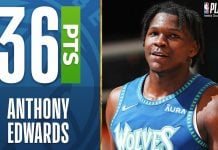 Anthony Edwards on trash talkers in Memphis: “The kids are the worst ones” 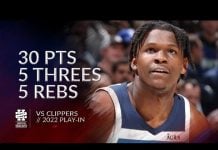 Anthony Edwards on Clippers: “They were scared to guard me” 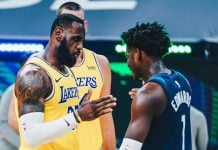 Anthony Edwards: “Every time I see a LeBron, Kevin Durant, everybody in that category, I’m trying to go at them”

Anthony Edwards: “I just like to dunk on people”