Rajon Rondo should make his return to the Boston Celtics, according to former NBA champion and ESPN analyst Kendrick Perkins.

Perkins noted it would be perfect for the Celtics, both on and off the court, to have Rondo return to Boston after six years.

“Rondo returning back to Boston would be a perfect for this Celtics team on and off the court! Just saying tho,” Perkins tweeted.

Rondo is struggling in his first season with the Atlanta Hawks, averaging 3.8 points, 2.2 rebounds and 3.6 assists in 17 games. 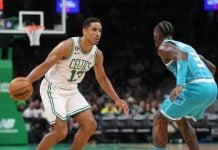