Dennis Schroder had nothing but good words to say about his former teammate in the Oklahoma City Thunder, Chris Paul.

Schoder said Paul is a ‘top-five all-time point guard’ and ‘learnt a lot’ from him.

“Leadership, how he talks to teammates, what he brings to the table every game. He’s 35 years old but he took care of his body. He’s just a great guy and top five of all-time point guards.

He’s up there. He’s a great person, his family is nice. I learned a lot from him,” Schroder told reporters, via Lakers Nation.

Schroder left the Thunder and joined the Lakers a few weeks ago and faced Paul in a preseason game on Wednesday.

Chris Paul on passing Magic Johnson on all-time assists list: “I’m honored and privileged but sh*t I ain’t done yet” 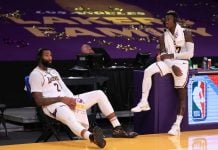 Brad Stevens on Jaylen Brown scoring 40 points vs the Lakers:...

Kyle Kuzma says he is unsure what the closing lineup of...

Steve Kerr says Steph Curry is ‘at the peak of his...