The expected starting lineup on the team’s opening night will be Kyle Lowry, Fred VanVleet, OG Anunoby, Pascal Siakam and Baynes, with Norman Powell coming off the bench as the sixth man, notes Josh Lewenberg of TSN Sports.

Last season, Baynes improved as a three-point shooter with the Phoenix Suns, making 1.4 threes per game and shooting 35.1 percent from three-point.

Baynes, 34, agreed to a two-year, $14.3 million deal with the Raptors in free agency after centers Marc Gasol and Serge Ibaka signed with the Los Angeles Lakers and Los Angeles Clippers, respectively. 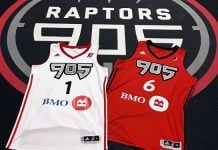