Golden State Warriors star Klay Thompson experienced a devastating injury by tearing his Achilles tendon this offseason, which will put him out of action for the second season in a row.

Steph Curry admitted that it was difficult for him when he learned what happened to his teammate, who, according to Curry, is the best 2-guard in the NBA.

“He’s the best 2-guard in the league. To get that call was a gut punch for sure. A lot of tears … But at the end of the day, we have to have his back,” Curry said. 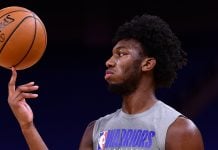 Most popular NBA stars of the last decade