Serbian international Stimac was rumoured to be joining the German champions over the weekend, he joins from Unicaja Malaga on a rumoured 2-year, €200,000-a-season deal, while veteran Jagla returns to Munich after spending last season at rivals Alba Berlin.

“We welcome Vladimir and Jan, they are ideal additions to our squad,” said Bayern Munich GM and sports director Marko Pesic. “We wanted inside player who knows the Euroleague, and I am pleased that when Jan entered the market we met on a fair level quickly. With Vladimir we get a center with international experience that he showed even before his last season in Malaga. He will give us additional presence on the board.”

26 year-old Stimac averaged 7.6 points in the Euroleague last season, as he played a vital role for Malaga off the bench as the Liga Endesa side reached the Top 16. He was also consistent in the domestic league as well, with the forward averaging 7.1 points a contest.

33 year-old Jagla re-signs for Bayern after leaving the club to join Alba Berlin in 2013. In his spell in the German capital, he helped them reach the quarter-finals of the Eurocup and they reached the Beko BBL Playoff Finals.

Well travelled Jagla has played for the German national team, last featuring at the 2011 Eurobasket in Lithuania., where they reached the second round. 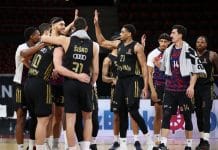 Crvena Zvezda from -21 till the amazing victory shot