Rick Carlisle revealed five NBA coaches and one GM were present in the players’ meeting on Wednesday night.

“I’m not gonna get into any details into the meetings I was in. I was in all the meetings and I’ll say this. I was privileged to be invited to the meeting yesterday along with Doc Rivers, Nick Nurse, Erik Spoelstra, Brad Stevens, and Masai Ujiri. We were six coaches and GMs that were invited.

As an ex-player and and an ex-active member of the players association, I was so proud of what the players accomplished in the meetings yesterday.

I was proud of the way that they were able to address the situation on with ownership and they came out of it with. A new justice coalition and a lot of immediate action that can happen now with respect to voting, legislation, and wide ranging list of things and so it was very constructive.

It was a hard two days. It was a very difficult two days A lot up in the air but the players decision to continue to play is a very important one historically and the fight goes on from here,” Carlisle told reporters, via Tomer Azarly of Clutchpoints.

NBA players decided to boycott Wednesday’s and Thursday’s games in the wake of Jacob Blake shooting.

The league will resume the playoffs with three games on Saturday. 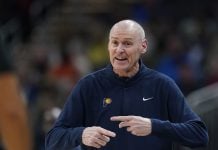