Los Angeles Clippers forward Marcus Morris has a son due in September and said he plans to be there for the birth.

“Wouldn’t miss it for the world,” Morris said, via Tania Ganguli of the Los Angeles Times.

Morris’ late arrival to Orlando was due to taking care of family, as he already has a two-year-old son at home.

The Clippers have already had Montrezl Harrell, Patrick Beverley and Lou Williams temporarily leave the “bubble”.

Gordon Hayward of the Boston Celtics and Dennis Schroder of the Oklahoma City Thunder also plan to leave the “bubble” in the future for the birth of their children. 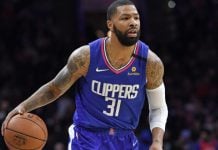 Clippers’ Marcus Morris: “This is championship or bust”

Ty Lue on Marcus Morris: “He said no symptoms, but unfortunately he caught it”