Boston Celtics forward Gordon Hayward mentioned that he will leave the NBA Orlando “bubble” if his wife goes into labor during the playoffs.

Hayward would have to spend at least several days away from the team during the playoffs.

“There’ll be a time if and when we’re down there and she’s going to have the baby, I’m for sure going to be with her,” Hayward said, via ESPN’s Tim Bontemps. “… It’s a pretty easy decision for me on that. I’ve been at the birth of every one of my children, and I think there are more important things in life. So we’ll cross that bridge when we get there.”

Players who get permission to leave the Orlando “bubble” for a family situation will be required to quarantine for four days once they return.

“I know the NBA has a protocol for that type of thing, and hopefully I can do the quarantining and testing the appropriate amount of time and then be back with the boys,” Hayward said.

Hayward has three young daughters and knows it will be tough to leave them for an extended period of time.

“Leaving the girlies is going to be a hard day for me,” he said. “They’re old enough now that they do understand what’s going on and they know I’m going to be gone for awhile. The opportunity to compete for a championship is something that a lot of us NBA players want to do. We want to go down there and continue the season and try to finish something that we’ve worked for all year. So I think there’s definitely a lot to think about.”

Hayward also praised his wife who will be taking their daughters back to Indianapolis to stay with family.

“My wife has been unbelievable through this whole thing,” he said. “She is taking care of the girls, taking care of me because I’ve been home more, and that’s something she does really well. All while being pregnant. Helping me get ready for this upcoming deal that we’re going to go through [and] at the same time, trying to get the girls ready to go back to Indianapolis for the baby. … I think we’re all blessed now … with the technology these days to be able to communicate with video calls, and I can still talk to her every day. It won’t be the same as me being there and doing story time and bedtime and all that good stuff, but maybe I can do some of that remotely.” 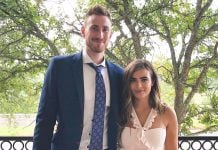