New Orleans Pelicans star Zion Williamson made a cameo during Sony’s PlayStation 5 reveal titled “The Future of Gaming” on Thursday.

The tech giants gave fans a preview of what’s to come, with the highly-anticipated console release set for later this year, and NBA 2K21 was one of the titles announced.

The NBA’s 2020/21 season will be very different, to say the least, but that hasn’t stopped the developers and publishers from working to bring gamers and basketball fans a fresh installment of the popular title. And who better to give us a glimpse than Zion? Certainly, the most-hyped rookie to come into the NBA since LeBron James.

You could check it out below:

There’s not much to be taken from this short reveal. But we do get to see a very lifelike version of the Pelicans star wearing Air Jordan 34 sneakers and putting the ball through the hoop in a variety of ways (and presumably breaking it).

A full trailer is likely to drop at some point this summer – previous reports indicated a September launch was in store for the title – but this sneak peek really wasn’t bad to look at. Of course, the current pandemic has done a lot to push just about everything back but the video above promises the game will be out this fall.

Zion Williamson on a potential extension: “Of course. I couldn’t sign it fast enough” 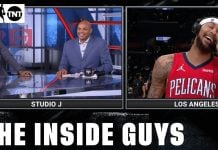 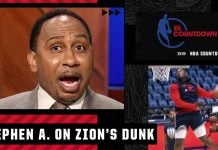 Stephen A. on Zion Williamson’s 360 dunk: IT MAKES ME WANT TO THROW UP!

Zion Williamson traveled with the team to Portland