Rachel Nichols recently recalled an incident with Michael Jordan that was initially embarrassing yet eventually spurred her confidence during the formative years of her career as a journalist and sportscaster.

The Showtime Sports journo revealed MJ called her out during a media session with the Chicago Bulls, asked why she wasn’t asking any questions, and accused her of freeloading.

Nichols, who was 19 at the time, said she eventually composed herself and got a question out, also crediting the former Bulls superstar for answering thoroughly before letting her know it was a good question. 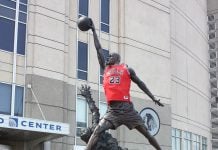